Since the last post on road related issues and one accident to boost I decided to prove more points about road signs, laws, enforcement and mere common sense, or lack there of… The good news is I’ve been seeing more TV ad campaigns about safe driving (helmet use, not speeding or driving under the influence, wearing seatbelts) during the day on several channels in Greece, however no true social marketing campaigns to involve drivers Ed, schools, municipalities as mentioned in my last post to be effective. Then there are the realities contrary to what I recently read the World Health Organization’s report Global Status Report on Road Safety 2015 where some policies/laws seem more severe in the U.S. or not while in comparison in Europe, and in the country of interest here in Greece, it paints an ideal picture of speeding laws, use of car seats, etc. but the everyday reality from what I see and picture here seems a bit different…

Let’s start with my fender bender — which occurred in a rural part of the country in a town in the Peloponnese heavily populated by tourism and domestics during the mid-August months. While at a crossroad with no stop sign on either side (contrary to the U.S. where there are several multi-stops in a similar set-up), the car across from my street (note it was two-way but due to heavy parking on both signs, typical of small towns), pulls aside to let the other pass signaling me to go through on the main road…but the driver on my left (both of us going straight) whom I never really saw since the cars were parked and the tree bushes covering entire view obscured my vision starts moving fast, out of nowhere, and even though I slammed on my breaks our cars “kissed”… while she kept going causing much more damage to her car than mine (please no comments about female drivers as neither of us had an accident in over 12 years… note why women have more safe driver points, and our “need to speed” is not an obsession). So I have quite a fender bender and thankfully no one was hurt. Police show up after 25 minutes (the station is one block away), their report is submitted but my insurer contacts me asking how the accident happened as the report makes no sense. The special info here is that no one knew the street names (no signs), and as around ten people who came out of their vacation homes to enjoy the “show” commenting on the fact that there are no stop signs.

This lead to my finding out that they CONSTANTLY have accidents on that particular crossroad …hmmm. I heard complaining about the municipality not doing their job, but it turns out that the police can’t do anything about this either? I took this a bit more seriously, deciding I was not going to be a mere bystander or non-action victim, and called someone whom I know is involved in local government asking why there are no street name signs or no stop signs. The response was  “it is being worked on” (δρομολογείται) . Some of you may think that maybe both I and the other driver should sue the municipality for negligence for our car damages? However going to court is backed up at least 1-2 years, as there is also a court crisis in Greece part of the larger crisis.

Laws exist and if one sees the WHO report referred to earlier they assume that in Greece we have good laws against speeding, laws for helmet use (read my last post, is this a joke?!), there are signs that speed is “monitored” — I cannot recall in the last 4 years seeing more than 4 cars stopped on main roads and avenues by traffic police who cannot even carry a gun or even have appropriate attire to keep them protected. Frankly, I hear so much negativity against police even though several incidents are really “isolated incidents” that some have found useful for their political gains (another story for another time),  though they are themselves now underpaid, and it seems that their power is rendered useless (never mind the graffiti “ACAB“) and I don’t see any real feel-good stories trying to change their image here in Greece and focus on the good work they do.

In speaking with some police officers, one of whom was a former student of mine, they want to have better “customer relations” but they say even if they are to do their job, some politician or person in power interferes and as it seems the system is pretty rotten at the core. I recall one time in Athens center last year someone flying through a red light at a high-pedestrian crossing while there was a group of officers (not traffic police) so I asked why no one went after the guy? The answer was “this is out of our jurisdiction”…. and no one was contacted. What about a better way to communicate and immediate action among the forces meant to keep us safe?!  Then there are the drinking-and-driving issues… I don’t recall or have seen in the last 6+ years anyone stopped for breathalyzer tests.

Some things won’t change unless we model change.

This means slow down — Children playing….!

If we are to do something more in our communities to become more health literate about road safety we need to work on better more coordinated social marketing campaigns. One organization that has been working on unifying this process is the European Social Marketing Association and people like yours truly are trying to spread the word…

I encourage us to share some of the positive ways we observe that people can share the road or build better road structures to prevent accidents (like two-way traffic barriers), better signs in colors better seen in daylight or evening times and in all weather conditions (pedestrians walking, speed limits clearly posted and enforced, etc.) as observed in high tourism roads in places like Cape Cod (Massachusetts) and New Hampshire — and yes even a beachside cafe road in Arcadia, Greece (loved the solar powered flashing light!).

Driving and operating motor vehicles and bicycles safely, thinking about community policies and safer roads is undoubtedly an important aspect of health literacy. Having the chance to observe people riding bicycles and motorcycles in two continents the last years, I have been interested in why there are so many people going without a helmet? Furthermore why are these adults NOT teaching their young children to wear helmets as we know that modeling good and positive behaviors will likely lead to the perception of children also following in these “healthy footsteps”.

More recently a forensics doctor in Sacramento, California had posted on Facebook an autopsy of what a broken head looked like in his frustration (and the family’s I am sure) of young men not following the road rules for helmet use — indeed it was shocking  as it looked like an open egg, with only a few layers including the dermis (outer skin) of how one of our most important organs the brain needs to be protected both from internal harm (bleeding, chemical alterations) and external influences (injuries).  I was reminded of an older Sting song which says how fragile we are (even though the song is more political in nature, as a health educator and counselor this hits home)…. many a family member and the community lament their loved one’s fate.  In the past I recall in a lower income neighborhood in Athens, Greece on one street there were at least two deaths of young people who did not wear helmets, and guess what? Their friends showed up at the funeral without a helmet!

For two days this last week I conducted my own observation (see photos) during the hottest part of the day (1-2 p.m.), and during a cooler evening time (9 p.m.), by counting the first 15 motorcyclists I saw (30 each day, total 60 persons observed) on two major Avenues in Attica (Vouliagmenis and Poseidonos Ave.), Greece to see how many wore helmets, as evidenced by the photos (age was irrelevant, gender seemed more important though many couples were heading to their evening excursions without helmets).  Out of the 30 people in the 1st day, I noticed 5 using helmets (the numbers seemed worse in the evening, so the idea that they are ‘hot’ from the sun is not the excuse), and the 2nd day I noticed 6 using helmets — average of ~ 19% using helmets, so 81% did not! Today I heard of a woman’s brother who w 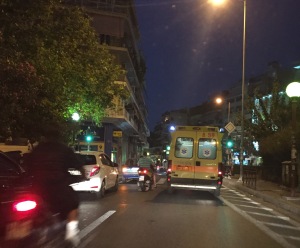 as driving on a country road and a young guy driving his motorcycle without a helmet about 120 km. an hour (75 miles/hour) hit his car, went flying in the air and you guessed it, cracked his head and died. The 2nd evening of my observation I also noticed a public ambulance trying to get through and almost no one pulling to the side… interestingly the ambulance only had their flashing lights on and very little siren sounds, so this signaled a partial emergency? Very confusing (notice the man with no helmet on the left too). In other countries the sirens are loud and if one doesn’t move to the side there are laws and fines, so people have learned their lessons and abide to road rules.

So what is it? Why are we not doing more to teach young people, old people, all people? Here are some general thoughts:

One article written by Papadaki et al. (2013) attempted through a sample explore the motivations for helmet use and in the sample found usage quite low in Greece. We know the risk of injury is higher as well as costs in disabilities, socio-economic costs to countries suffering in their crises like Greece, and CDC has great outlines of related issues on their site’s post  — Motorcycle Safety & Head injuries and Bicycle Safety and how many laws and money can be saved for people and their communities!

Of course there are more organized groups of cyclers that do wear their bike helmets in Greece like Cycle Greece (and if any of you are interested in this venture a good idea to look them up!) . However I have observed both in Athen’s city center near Parliament and also on Poseidonos Avenue other organized ‘groups’ members on evening group cycling  go without a helmet, so again consistency? People know how cars race down the main Avenues (again minimal policing for speeding) … do you really want to get carried away with that? How about promoting stories of safety and preventing injury and tragedy to our communities and schools using better social marketing campaigns — I like this image from the UK company on wearing helmets seen below.

Your head needs to be protected as much as possible, wear a helmet! 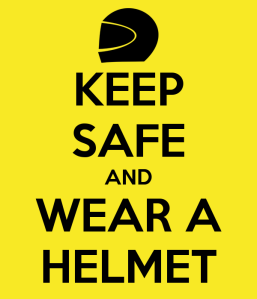