Everyone loves flamingos right? Birds migrate to warmer climates throughout the year despite global warming and colder climates with snow in unlikely places (last post). We all should know that birds are one of the major ways disease is transmitted across continents and via mosquitoes to animals and humans! .

Have you ever stopped to think how your own actions could prevent further spread of what are known as “communicable diseases” such as flu? This season is prime for H1N1 (known as swine flu) or others like bird flu, and the U. S. Centers for Disease Control and Prevention as well as the World Health Organization constantly share updates on disease spread and prevention.

Good friend Jenny, did her part too! She’s not only talented as a Dramaturg and Stage Director, she recently proved to be very health literate too! Being health literate is having the ability to act appropriately medically (getting tested, vaccinated, taking appropriate meds once sick, resting and drinking plenty of fluids to prevent dehydration), and taking personal responsibility to prevent disease spread.

Her Facebook post (permission to share with you) says it all. It was the first time we had “virtual drinks” and it was a great time despite illness!  Thanks Jenny for doing your part! Maybe it’s true that birds of a feather truly hang together…

Perhaps it is due to ‘chance’ or is it related to climate changes, but many parts of the world are having some unusual weather.  Take snow in greater Athens.  Unexpected yet so perfect ‘powder snow’ as the image below from Kifissia (Northern suburb of Athens).  In most places it was about 1 foot of snow (0.30 cm.) but in other places over 4 feet (1.22 meters). From the perspective of our individual and community knowledge and what I’ve been seeing in the local news here in Greece, our ‘snow literacy’ is lacking. Then again, some other crazy stories from snow-familiar places like New England (U.S.) who put out calls for snow emergencies are similar — this includes the guy who went jogging during a snow emergency and was accidentally plowed over because the snow plower worker did not see him (understandable due to low light or snow flurries)… or people driving fast in dangerous snow conditions.

There are many types of snow that one can find from places like the ‘National Snow and Ice Data Center’ (Types of Snow, NSIDC). We all can remember at least once making those wonderful snow angels so why ruin that pleasantry with a tragedy film of small-town America which received low reviews this past decade (Snow Angels from the New York Times Review). 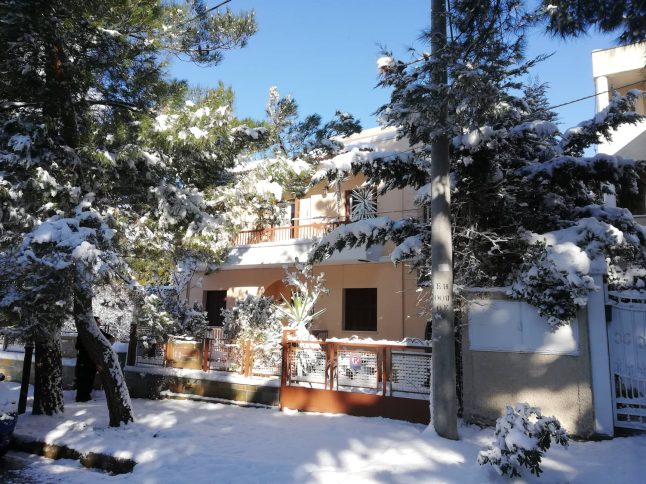 Snow melts, hence ice, hence slippage and likely injury.  You need to sweep and shovel the snow, throw sand or salt on it as it melts, and at night when it is colder tread carefully (including appropriate shoes, and car tires) or not at all.  Avoid slipping, sliding, to prevent injury. Of course on the other hand, some physical therapists, orthopedics and sports doctors will have some extra work!

Question #1 — why go running in your school courtyard if your principal told you not to go out?  This happened to a school today in Northern Greece and the young man (anonymous) at about age 15 (the highest age of ‘sensation-seeking behaviors’ as described by developmentalists) fell and broke his leg.  His parents are now going to sue.

Question #2 — can parents afford to not go to work because their kids’ schools are declared closed?  This is because the municipality does not have appropriate snow plowing machines, no basic shoveling done, and worse no salt to throw on the ice.

Question #4 — why can’t people be responsible to take care of ploughing their front sidewalk as they do in other parts of the world, else be fined?  This could include cleaning up waste or unwanted tagging graffiti (some of it is done because the thieves want to ‘mark’ their target territory). Since we also want to respect cities I must emphasize the recent ‘fines’ placed on a 15-year-old Greek girl who thought it would be ‘cute’ to write her name and ‘was here’ on a historical bridge in Florence, Italy. She got caught, fined, and could have faced imprisonment.  My final question — why are we not following suit in common sense policies and procedures?

Yes indeed, snow literacy should be one of the fundamentals of survival and overall health literacy.

This year started on the right foot …friends, family and rethinking modern time challenges. Traveling across continents helps one understand what younger and older people are influenced by and what brings the integenerations together! On New Year’s Eve I attended a smoke-free event, on New Year’s Day I read two popular magazines — one local and one national — a renowned national newspaper, learned about an odd game of “Cards Against Humanity”, and partook in some sing-a-long activities.

Starting with the last most unpolitically correct game I suppose the linguistic humorists make the “cut” here ….. personally not sure I like it but it got people off their mobile smartphones!

Regarding language, reading a great article in the local New England Magazine December 2018 issue (photo above) by clinical social worker Andrew Aaron I read a great term “emotional hibernation”. The focus was about how much people  don’t communicate and “in-pain partners look for a sign to be valued waiting for the cold winter of insensitivity to pass in the warm spring of love to arrive” (p. 55). Openess is indeed an essential aspect of love and what’s needed in the new year! And what about our over-indulgence and need for “likes” in social media creating anxiety and FOMO (fear of missing out)?!

We took about 45 minutes with the older generation singing around “Kostas” the bouzouki player giving me hope in inter-generation of community involvement with the power of music. It got the kids off their tablets and slowly young adults coming in. This should be a requirement of community health literacy.

Speaking of community living, many of us around the globe take for granted our hair and clothes not stinking from smoke as others abuse our rights for clean air.  Such a logical and simple thing! To think that many of us in the 1980s and 1990s lived the Big Tobacco fights to witnesss their ever ending expansion into the rest of the unsuspecting world.

What resolutions and good habits do you want to start in the new year ahead!? Food for thought no matter how you cut your New Year’s cake, well wishes & happy 2019 to all.