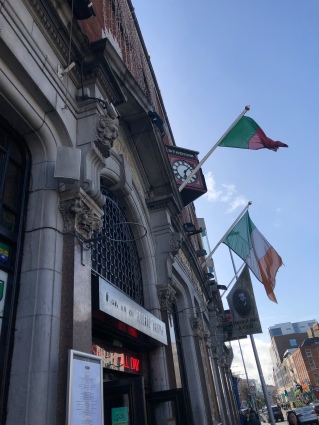 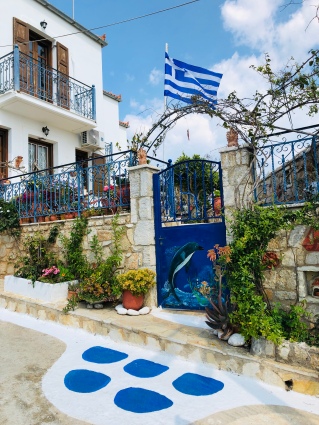 Flags as symbols used across nations imply “allegiance” to a cause, a country, used to more easily communicate across boundaries seen from afar. A white flag indicates surrender, while we have the sea/ocean ratings using flags and the coveted blue flag as an eco-label to indicate a clean swimmable beach area.

As we are in the age of globalization and people’s struggle (or not) for identity, it seems that flags have positive and negative perceptions.  There is a lot of work put into their design and symbolism. People have both celebrated and lost their lives for the cause their flag’s allegiance represents. Identity is indeed an evolving and necessary part of our personality as well as the people we put our trust in. This includes our family, educators, healthcare providers, politicians. And all these individuals can help our overall community well-being and health literacy.

This March gave me an opportunity to compare two countries and festivities that involve the showcasing (or choosing not) of the respective country’s flag. Is it relevant to larger community health? Or at least indicative of it? I think so. Let’s start with the two flag images first — one from Dublin, Ireland and the second from a small village in Greece.

In Dublin we had many festive images and there was a lot of drinking (whiskey and Guinness) for St. Patrick’s day March 17th — see post: Luck o’ the Irish. In Greece a lot of food (supposedly healthier foods like fried cod (called «μπακαλιάρο»)  beets or greens, and the infamous garlic concoction of “skordalia” (σκορδαλιά — see recipe by Alkis!)  and wine or ouzo (similar to zambuco) lots of it…alcohol always in need of temperance. 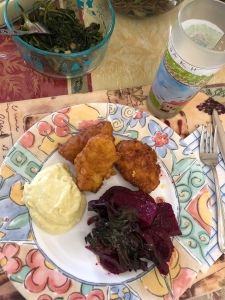 It seems in Dublin flags were everywhere outside and inside like hotel lobbies in bars/pubs and restaurants, combined with the Shamrock which symbolizes the four life goals — hope, faith, love, luck, but do these also imply health or do we hope to have faith and are lucky in love which hopefully means long term health?!

In Greece flags as in all countries flow outside public buildings and some homes but it seems in the last years due to crisis and some extremism (e.g. Golden Dawn extreme right group who display both a Nazi-style flag and a Greek flag) people are less inclined to put out flags that once they used to more commonly display. One person specifically commented that he used to have a flag representing his island but due to his neighborhood’s flag being the same one flown by an extremist  group he refused to put it up again in celebrating Independence Day.  Imagine the U.S. or other parts of the world not having their flags flowing in patriotism?

If some people post images or write a post on behalf of their country’s  day of independence there should be no shame or people avoiding putting “likes” for fear of being  perceived as “nationalists”.  This is problematic, as this indeed takes away from the positive side of a person’s identity.

We  have multiple identities and it’s very unfair for people to feel pressured into elements of shame. Worse, the burning of a flag in the name of anarchy (hooded anarchists do not even know why they do it….’government’ is not the same as a country and what they have fought for). This I agree with this Greek author who calls the hooded youth pictured “idiots” in this Greek article.

In countries where people are very proud of displaying their flags such in France for the United States it would seem rather odd if you did not include a flag outside your immediate home or the community for days of independence. Let’s rethink and keep discussing  for the sake of community health shall we?! Be proud, be grateful, respect ✊! 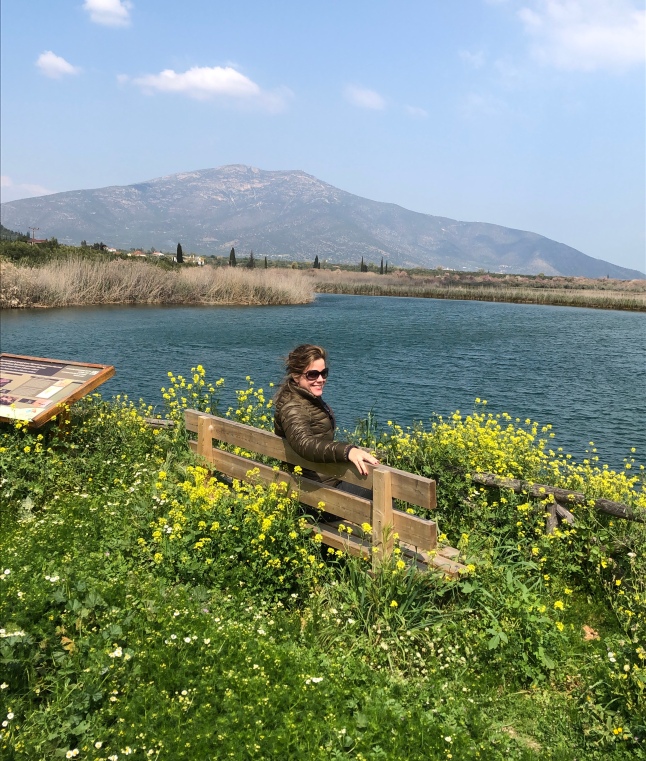 I love Spring and visiting the countryside of Greece to partake in nature’s bounty. During peak pollen season I suffer greatly from allergies but I take the chance (and my antihistamines if needed) since the experience is a wonderful way to gather sunlight in the form of Vitamin D, as well as overall healing for the spirit.

As it turns out due to climate changes, the number of sufferers has been increasing according to the World Allergy Association’s WAA 2016 report. AND March 24th is world tuberculosis (TB) awareness day. So many things to be aware and health literate about (see past allergies post)!

Years ago, I read a book about a doctor who has worked with clinics around the world (Peru, Russia, Haiti)  and on his own building hospitals in downtrodden areas of Haiti and increasing awareness around TB. The book by Tracy Kidder published in 2003 was titled “Mountains Beyond Mountains.” This was the real-world story of how one person can make a difference in world health matters…. hail the idealists! However 16 years later TB is back at its peak in many parts of the globe including the Mediterranean due to population flux and lack of taking antibiotics appropriately (too many, wrong doses).

This hits me every time I see grand hotels built in the mountains as it was believed that clean air — more oxygen in essence — would help cure people thus many of these seemingly sanatoriums are considered exotic locations for other purposes (thankfully) today whether it be for skiing, sightseeing or simply taking a break! One of my favorite grand must-see hotels is the Mt. Washington hotel in New Hampshire’s Bretton Woods which dates back to the early 1900s was the place where the formation of the World Bank began after the famous Bretton World Conference to deal with the aftermath of the World War, as well as a later movie with Jack Nicholson called “The Shining”. Note, financial literacy is ONE part of health literacy is an entire new section to ponder for this blog…. stay tuned.

I posted a question about SPRING activities on a social media site,  “Each Spring since living here, I pick chamomile (despite pollen symptoms 😁) to remind myself the importance of nature helping calm the mind as well as our body with necessary healing. What do you do? Do you recognize nature’s bounties or simply pass them by?” Perhaps it goes along with the question about awareness as posed “do you stop to smell the roses?” or other small flowers, I certainly hope so!

Even though one should pick chamomile in late April or even beginning of May, I did so today …and here are some steps for that wonderful tea. Does wonders for one’s skin, stomach, great for anti-cancer and anti-diabetes regimens considered one of nature’s miracle teas (see article) . The word in Greek is χαμομήλι stems from the words “chamo” and “mile” meaning the apple of the earth …hmm sounds similar to “an apple a day keeps the doctor away!”

1) ensure the herb is indeed chamomile by smelling it first, and noticing the high hill-like shaped yellow middle (since some  mini daisies look similar!)

2) pick many tips and stems (careful don’t damage any roots to allow for regrowing) as if running a comb through nature’s “hair”. Enjoy each moment using all your senses of sight, smell and touch.

3) take home and allow it to dry for a week and more so it can be stored in glass jars for use any season (for drying use cool dry areas, careful of windy spots and consider a tulle cover). 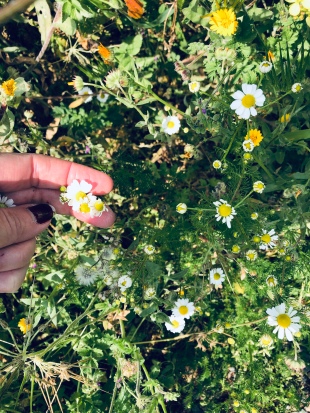 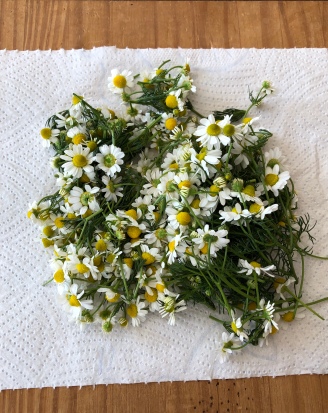 4) boil yourself a nice cup of chamomile tea and you’ll feel healthy and calm even just recalling that lovely day you picked it!

I close with a quote by past U. S. First Lady Eleanor Roosevelt with an image of my wonderful tea …. all well worth it. 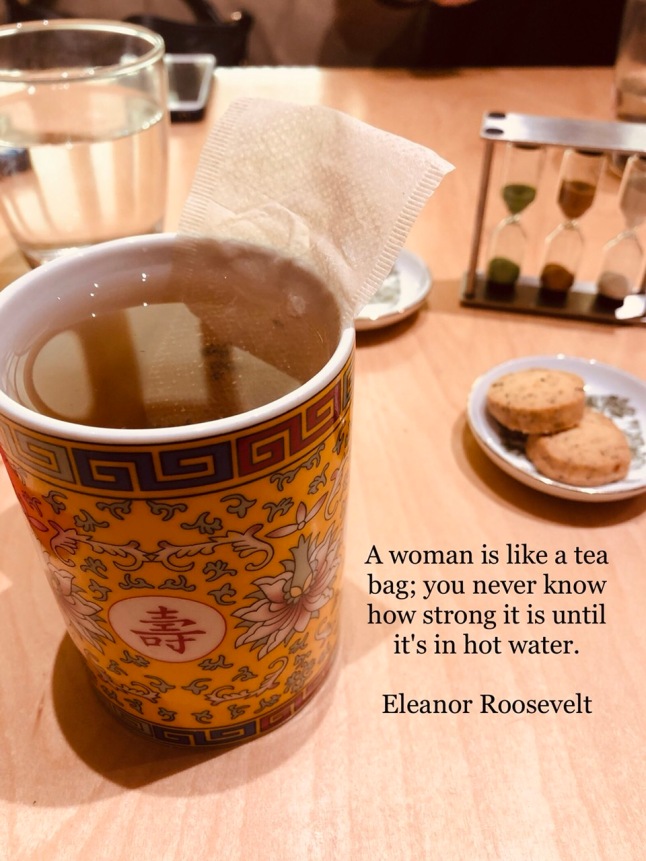 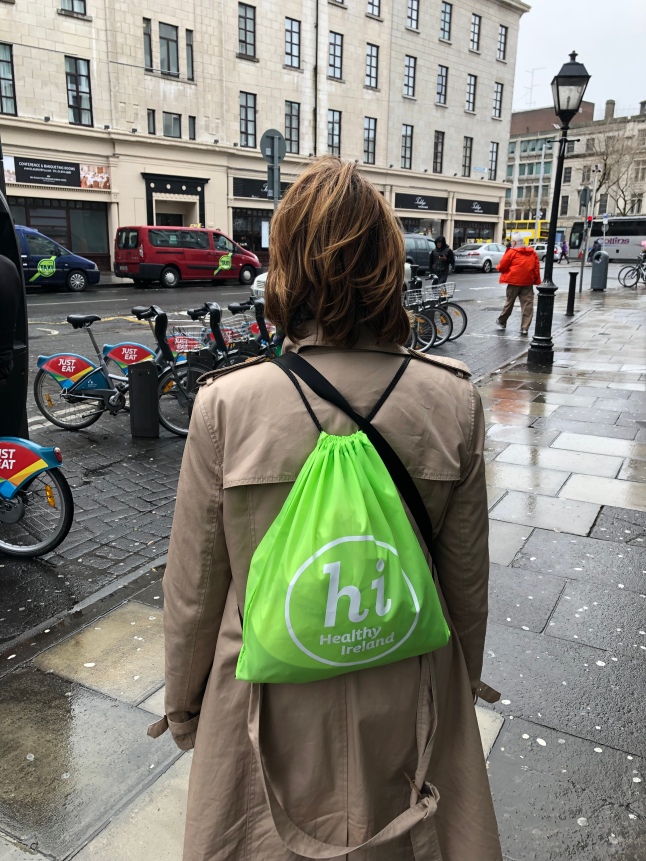 “Healthy Ireland” …. a great motto that we found got people’s attention printed on a lime green bag, as we walked around Dublin, Ireland this St. Patrick’s weekend. It seems this city fits the health literate cities model in terms of safety particularly since most of us are used to looking to the left side as we cross the street (drivers come from the right here as in the UK) so we need clear street markings and precautions to avoid pedestrian disasters!

Contributing  to the idea of “respecting cities” as locals or visitors, we observed  easily accessible cycling and walking paths, relatively spotless city streets with little to no dirty tagging  or “tag bombing” on city signs and historical buildings, clear signage and very helpful locals! 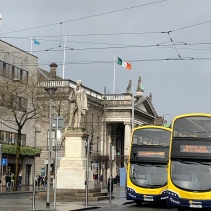 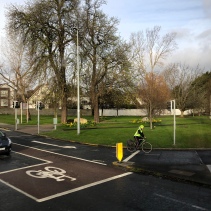 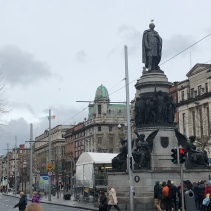 As with every westernized country that is over consuming sugar, fat, alcohol marketed to us daily,  all contribute to many chronic health issues if unmonitored (cardiovascular disease, obesity, alcoholism, cancer, etc.) it is important for us to keep our consumer populations informed about their health choices and habits. It’s ok to consume that “fat free in the middle” donut (LOL about the pink sign we saw outside a popular donut chain), a perfect Irish whiskey or apple cider once in a while but we also need to exercise a bit, take care around binge drinking (which happens on many college campuses and beyond) and enjoy all …. in moderation! 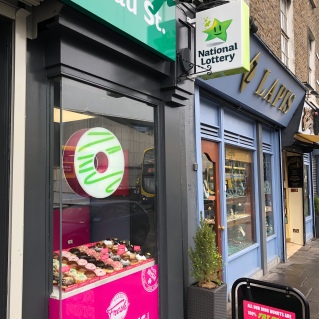 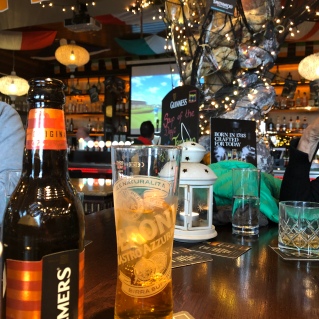 Thoroughly enjoyed the 4th EU Health Literacy conference in Dublin hearing about some great initiatives and building local and international networks.  We looked for shamrocks and leprechauns — no luck there — but at the end we had some great walks near the woods, ponds and castles (we recommend the half-day tour in Dublin at Malahide Castle).

Éirinn go Brách (Erin go Bragh phrase)! The Guinness was great and we toast to our luck in being there for the St. Patrick’s Day (March 17th) festivities  preparations  …. hoping the Luck O’ the Irish rubs off for all of us working together for healthier communities around the globe!

On Friday February 22nd groups of young people, professionals of all ages and company mentors from pharmaceuticals and insurance companies got together to form teams geared to “hacking” health and building health literacy through an MIT Hacking health literacy event in Athens, Greece. Respecting the privacy of the winners two days later, the emphasis of the monetary awards was on giving hope for progress in addition to mentoring and longer term support for product fruition. Much needed in a country very much in shambles due to the crisis of the past 10 years — check out the Lancet’s “Omens of a Health Tragedy” written in earlier part of the crisis, and the most recent The New York Times opinion article written by Simon Critchley titled “Athens in Pieces: The Stench of the Academy. ” 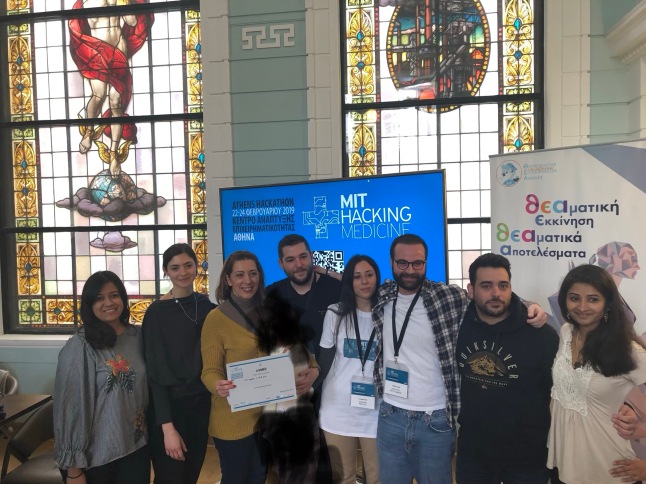 Speaking about health literacy in Greece and discussing the first HLS-EU study several aspects were brought up of individual and social responsibility — see video link.  It seems that this photo I shared says it all when public systems don’t work and thus includes lack of maintenance, no policing, and high risk behaviors. Enough said ….the more you look at it, the more you’d realize there is so much to do ! 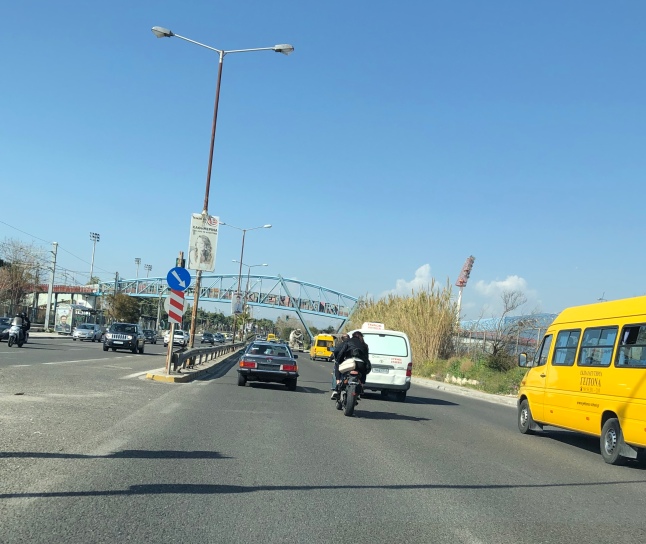 What”s wrong with this picture!?