Tragedy befalls us or does it? in Greek «τραγωδία» is a word referring to a very sad situation that doesn’t have a very happy conclusion as it leads to suffering and most often death. When we say “befalls” it refers to things that happen by fate or chance. In the ancient world there were perfect explanations for everything, and usually involved ‘gods’ or other deities and mere mortals often trying somehow to make things “right” as they raise for us ethical or real life dilemmas.

Taking a recent trip with a group of colleagues and friends to the ancient theater of Epidaurus, we experienced one of the most famous of Sophocles’ plays “Electra” which the wise poet wrote towards the end of his career playing up the post-trauma of the Trojan war in the house of Mycenaean King Agamemnon (more here: classical literature ‘Elektra’). Though many directors change the structure of the plays to make them more to modern standards, this version was truly respectful of the storyline. More importantly we FELT the pain and inner struggle of the characters…I can still hear the drums beating as fast as my heart in the evening darkness as the actors in unison walked slowly with floating robes like solemn soldiers on a mission.

This ancient theater in the valley of the Peloponnese is an acoustical marvel, and many world famous actors have passed through including Kevin Spacey as King Richard III (by William Shakespeare) honoring the ancient tradition with exceptional performance — glimpses can be had on this ‘World Stage’ clip.

I still recall Elektra’s brother Orestes’ blood-stained arms, the circles of ashes made in Elektra’s frenzy. Ashes to ashes, from dust to dust, this indeed is all we are made of. How ironic that the very next day we would be witnessing real-time tragedies of fire and ashes with almost 100 people dead in the ‘eye’ (mati) of Rafina, a seaside community outside of Athens (coincidentally the most losses in a fire since WWII), multitudes of animals, properties and nature burned within a matter of hours…. in the days following rainstorms and flooded streets in many parts of Greece as well as a “state of emergency” in California fires on the other side of the planet this year with several firefighters already dead and almost 100,000 acres of land burned to the ground.  Apparently since last year a sobering 60 servicemen have lost their lives on duty from such things like falling trees, bulldozers, etc. (more in the Mercury News article)

Unfortunately, tragedy befell Greece, and this is due to several factors in my humble opinion —

This tragedy could have happened to any government (or political party) but the situation was all too familiar to the fires back in 2007… it was purposeful arson in many parts that also ended in tragedy. However we know that prior to 2007 the persons responsible for the fire brigade planning in the country seemed to have more clear plans to make clear paths for the fires not to ‘jump’, cutting down overgrown trees, etc.  There are so many unpaved roads, no street signs, no functioning fire hydrants (or none at all) and the list goes on and on. Notably when systems don’t work (systems), we need to test and change them to be more effective as public safety and the public’s health should override any individual ‘rights’ this is why public health law exists!

What’s left now for many are feelings of emptiness and anger for many (typical of grief and post-traumatic symptoms that can range from loss of sleep to anxiety or the need to self-medicate). Grief or “bereavement” Counseling is needed and it is important to continue support groups and understand that even those watching the news may have anxiety or worse panic attack type reactions (children are in particular vulnerable to anxiety so it’s important to discuss with them ways to feel safe and express their sad or angry feelings). Play and music therapy are useful as are regular counseling and parenting techniques. A local bookstore has a book for kids emphasizing the circle of life and loss for children to understand (Εκδόσεις Παπαδόπουλος «Η Έλλη και ο Κύκλος της Ζωής» — Papadopoulos book publishers “Ellie and the Circle of Life”) but there are no books in Greek specific to dealing with traumatic events. A spiritual approach and books like Thomas Moore’s Dark Nights of the Soul help people who have experienced loss and difficult life ordeals. There are several theories about the stages of bereavement and people can feel denial that it happened (avoidance), anger, or try to accept it and move on. Particular emphasis on expressing sadness and anger is needed here.  It’s also not easy for servicemen (people) to endure everything from evacuating to picking up the corpses. There are many groups, therapists who use cognitive behavioral, meditation, and virtual reality techniques proven to be effective with these workers. 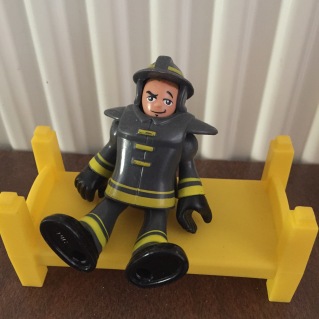 We are angry at the government and inefficiency. Mr. Tosca, the Ministry of Internal Affairs recently resigned, but nothing will change unless we re-evaluate and organize better — house in order, country in order, and see my past post on Kondo method. We can help Greece, a country in its worse crisis since WWII, by donating to worthwhile groups and initiatives like Act4Greece or The Hellenic Initiative, and Red Cross initiatives for those affected. In addition some self-care on a daily and weekly level like guided meditation helps. If we do this at least 3 times a week (much like exercise habits) and I particularly liked this one to bring more inner peace:

We cannot change that which we cannot control but YES we can learn to be more effective for the betterment of our communities.